Although the present Holy Ghost Church was dedicated on July 8, 1943, the parish has its roots in the 1860 construction of St. Mary’s Cathedral, the first Catholic church in Denver. 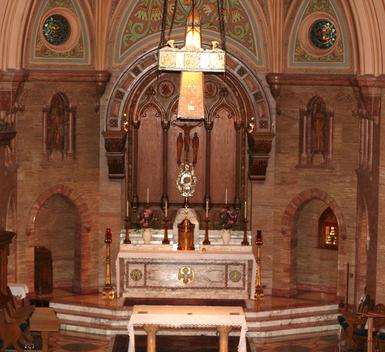 The cathedral parish was divided, and Holy Ghost became a parish under Fr. Frederick Bender; a pioneer priest of the diocese. He built a church at 20th and Curtis Streets, and furnished it with objects and vessels from the old St. Mary’s Cathedral. His successor, Fr. Garrett Burke, initiated Holy Ghost’s long-standing traditions of fine music and service to the needy. He managed the Catholic Workingman’s Club and hosted numerous concerts and musical programs. ​

The property at 19th and California Streets, on which the present Holy Ghost Church stands, was purchased for nearly $70,000 by Fr. William Neenan, then pastor. Under the architect J. B. Benedict, ground was broken for the new church on February 29, 1924. Less than 1/3 of the envisioned church was completed at its dedication on December 14, 1924. Fr. John Mulroy, Director of Catholic Charities in the archdiocese, became the fourth pastor of Holy Ghost in 1930. With the help of Fr. Jerome Weinert, he began the practice of daily exposition of the Blessed Sacrament, another tradition that endures to this day. Helen G. Bonfils, who had taken an interest in the parish for some years, announced in October 1940 that she would complete the church structure in memory of her parents. Three hundred tons of Colorado colocreme travertine marble beautify the walls and columns of the church, making it the largest collection of this stone in the United States.

Of the many priests who have served Holy Ghost over the years, none is more beloved than Fr. C. B. Woodrich, better known as “Fr. Woody.” He was a priest in residence at Holy Ghost while still editor of the Denver Catholic Register in the 1970’s. After becoming pastor in 1978, he became more and more the champion of the poor and homeless in Denver. He opened the church for the homeless on cold winter nights and helped to found the Samaritan House shelter for the homeless. In 1985 he instituted our annual Christmas dinner for the needy, which now provides gifts and meals to over 3,000 people. In 1991, Msgr. Woodrich’s good friend and founder of the church’s daily sandwich line, Msgr. John Anderson, returned as pastor. Throughout the late 1990’s, the Vincentians continued the mission of Holy Ghost Church. 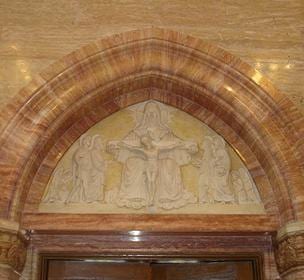 Exactly 58 years after its dedication, Holy Ghost welcomed the Oblates of the Virgin Mary. Founded in 1826 by Fr. Bruno Lanteri, the Oblates bring a rich tradition of their own, specializing in preaching, confessions, spiritual direction and retreats. They have a tender devotion to the Virgin Mary, and profess firm allegiance to the Pope.

The Oblates opened the Lanteri Center for Ignatian Spirituality in Denver.

You can find more details on the history of Holy Ghost and the Catholic Church in Colorado, in Thomas Noel's Colorado Catholicism.

Architecturally the Church of the Holy Ghost in Denver is an original conception, a fusion of Spanish and Italian Renaissance art. Suggestion of both types are to be found blended in majestic beauty with a unity of centralized space and completeness of richly modeled and colored surfaces. All of the order and design are made subservient to the inspirational setting for daily exposition of the Blessed Sacrament at the high altar. Holy Ghost Church is Denver’s Eucharistic shrine. The church has a warm, light, and elegant ambience made beautiful by the purity of its lines and the delicacy of its detail. It is a masterpiece of rhythmic symmetry. 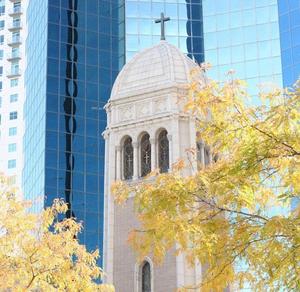 The visitor to Holy Ghost Church is met with astounding beauty even in the exterior of the edifice. A magnificent tower rises 110 feet above the street, surmounted by a six-foot bronze cross. Narrow vaulting Renaissance windows mark the four sides of the tower from the front and rear. Above the main entrance of the church is a tympanum containing a nimbus of the Holy Ghost. On either side stand pelicans, symbols of the Eucharist who, according to legend, fed their starving young by tearing flesh from their own breasts. Wheat and grapes form a border around the doors of the church, which aptly symbolize the gates to heaven.

Sentinels guarding the entrance are bronze miniatures of St. Paul and St. Rita, who are also symbolized in terra cotta plaques or medallions above and to the sides of the entry arch. Capping each door column is a metal cross resting on a globe. Still higher above the entrance to the church, approximately 30 feet above the street, is a second tympanum surrounding a panel of three stained-glass windows. The tympanum bears symbols of the persons of the Trinity: the hand of the Father, the Lamb, and the dove. The windows depict the descent of the Holy Ghost upon the Virgin Mary and the Apostles (Acts 2).

Upon entering the church one is witness to the largest installation of colocreme travertine in the United States. Approximately 300 tons of marble, almost entirely mined in Colorado, were used on the walls, piers, and columns. Dividing the narthex from the nave are lovely colonnettes containing oak panels that may be lifted or lowered to admit or close the view to the body of the church. At the extreme left of the narthex is the former baptistery, which is finished in travertine and entered through an iron gate. The baptistery windows represent the Baptism of Jesus, Jesus blessing the children, and a phoenix, symbol of resurrection.

In the church proper one is first struck by the beauty and brilliance of the marble. Three basic shades are used: cream, dark pink, and ruby. The shrine of St. Rita on right side of the nave is done in travertine, while the front of the altar has a mosaic plaque containing a Christogram, and the floor is of Botticino marble. The left side of the nave contains four confessionals, which are used daily in the Sacrament of Reconciliation. Fifty feet above the floor of the central nave is an intricate ceiling of wooden trusses and acoustical tile panels. Across the chancel arch of the cruciform structure is the inscription “Holy, Holy, Holy God Almighty” (Rev. 7), and the vaulted transept is richly symbolic of the Holy Eucharist.

The pilaster caps on both the left and right sides of the church parallel each other in symbolism, and the architraves are filled with delicate arabesques. Capstones in the colonnades are representative of the Father, Son, Holy Ghost, Sacred Heart, and the Church. Immediately above the entrance to the nave as you look back is a plaque depicting the Trinity. At either extremity of the central arch in the chancel are medallions of the four Evangelists, two on each side. The stations of the cross are oil paintings inset in frames with individual lights, the only stations of their kind executed by Conrad Scmitt of Milwaukee, Wisconsin.

​The high altar is of Breche violet marble, imported from Italy, and is canopied by a glorious baldachino and flanked by a reredos of oak. Inset mosaic plaques in the altar depict the Holy Ghost, the Chi Rho, and the Alpha and Omega. The floors of the sanctuary contain Botticino marble, dark pink travertine, and terrazzo with inlaid brass. The communion rail is of Breche violet marble with several inlaid mosaics of Eucharistic symbols. The top of the communion rail itself has a glimmering finish of polished brass. Each of the side altars is finished in Botticino marble, and highlighted by beautiful wood sculptures made by the same artist who carved the baldachino and pulpit. 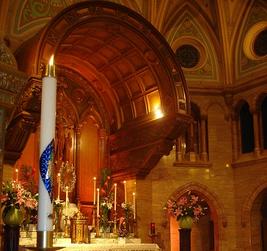 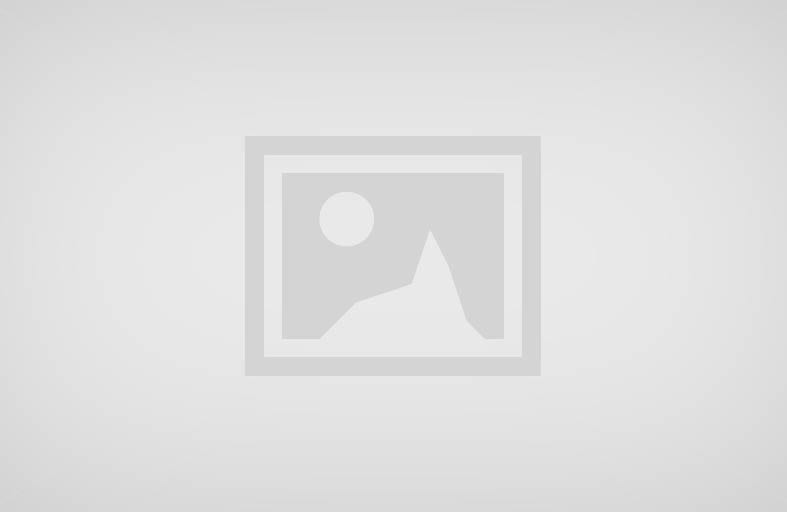 The stained-glass windows of the church are rich with symbols of the Old and New Testaments. On the left side (as you face the altar) of the church, beginning near the narthex, the clerestory windows successively represent four Old Testament prophets: Daniel, Ezechiel, Jeremiah, and Isaiah. Each of these is flanked by two windows: Ureil and Raphael, St. Matthias and St. Simon, St. James the less and St. Thomas, and St. Andrew and St. John, respectively. Facing the windows of the four Prophets on the opposite (right) side, are the four Evangelists: Matthew (nearest the altar), Mark, Luke, and John.

The Evangelists are flanked by (beginning nearest the altar), St. Peter and St. James the Greater, St. Philip and St. Bartholomew, St. Jude and St. Matthew, and St. Gertrude and St. Michael, respectively. Seven lower windows in the nave and transept represent the seven sacraments: (beginning near the narthex) Marriage (Wedding at Cana), Eucharist (adoration of St. Thomas Aquinas), Penance (Christ breathing on the eleven), Baptism (Nicodemus), Confirmation, Holy Orders, and Anointing of the Sick. The four small circular windows above the baldachino contain a shield, birds, a chalice, and a symbol of the Holy Ghost. Other windows depict the prophecy of Isaiah, the Annunciation, the Ascension, St. Peter before the Sanhedrin, St. Peter preaching to the Nations, the Conversion of St. Paul, Ordination of bishops, the Election of a pope, the Inspiration of Holy Scripture, St. Stephen’s Martyrdom, St. Paul, St. Basil, St. Augustine, St. Jerome, St. John Chrysostom, Christ the King, and Christ the Judge.